“Clients will see immediate improvements once live with TeleTracking, but without consistent adoption of standard workflows, you won’t achieve long-term operational outcomes.”

A small beachside hospital in North Carolina recently found itself at capacity due to late day discharges and long lengths of stay. When the leadership team decided to adopt TeleTracking, they were surprised that the technology almost immediately exposed gaps in workflows that likely contributed to the capacity challenges.

TeleTracking’s Services team—the consulting arm that works in lock-step with front-line staff to drive adoption of best practices and technology—had early buy-in from the hospital leadership team which was vital to the success of the project. For example, the Services team began preparing C-suite executives early on to communicate powerful top-down messages that would create a more receptive cultural landscape for every potential end-user. In the absence of executive sponsors, staff may feel skeptical about the investment in new software, rely on workarounds and reject best practices.

“Our services are customized to the client’s needs with a focus on change management, discharge processes and operational efficiencies,” said Kelly Robertson, Services Consultant. “Great software requires great users, and great users learn in an atmosphere of organizational readiness. For that, we all need to mutually understand why we’re making the changes, and how it will benefit them in their roles.”

Upon TeleTracking’s arrival, the process of redefining nursing roles and responsibilities was already underway in an effort to optimize operations. TeleTracking’s Services team scheduled their initial four-visit engagement to prepare the already-shifting organization for the changes to come.

“In a small organization, you can do a lot in four visits as long as you have key, engaged stakeholders,” Robertson said. “We were lucky.”

In the first half-day event, the hospital assembled the ideal audience to discuss organizational readiness: the C-suite, directors, and managers arrived to engage in discussions of the hospital’s mission, vision, and values, the science of patient flow, and how it all relates to better service for patients. The audience learned foundational components to TeleTracking, so once the design phase came along, they were able to communicate the “why” of TeleTracking, a vital piece of successful change management — and it all happened before technology ever crossed the threshold.

During the weeks that followed, Robertson led the team in setting up a local governance council and also collaborated with the team on milestones and target times. This effort empowered the team to really understand and study TeleTracking’s data objectively, identify gaps, resolve issues, tackle opportunities and measure success.

“We want the whole organization to understand the premise of throughput. Then they’re more willing to adopt.”

The TeleTracking Services team also conducted a typical discharge engagement: for a full workday, charge nurses, unit secretaries and managers assembled to train about both the technology and understand the messaging that resulted from the original leadership event. They revisited the mission, vision and values, and tied in with the “why.”

“We want the whole organization to understand the premise of throughput and that sense of urgency,” Robertson said. “Then they’re more willing to adopt.”

While the technology is the catalyst for patient flow, TeleTracking’s team ensures that organizations meet goals over the long term. It’s not just about the technology; it’s about changing habits.

“In the beginning, clients will see improvements from TeleTracking’s technology,” she said. “But without consistent adoption of standard workflows, you’re not going to achieve your long-term operational outcomes.

Of course, change is the only certainty, and the system has seen its share since engaging with TeleTracking. In recent months, much of the system’s senior leadership has moved on.

After the initial engagements, hospital leadership decided to extend TeleTracking’s advisory contract through the interim changes. As a former CNO, Robertson understands what’s it like to deal with leadership changes in a hospital, and how that can disrupt change management. Consistently reinforcing the why of new workflows and processes is central to the success of TeleTracking’s implementation, and changes in leadership puts that consistency at risk.

The outcomes of the work have been clear: the hospital has exceeded best practice targets on discharge—by 60%—and they’ve reduced Length of Stay and Left Without Being Seen by 26 and 27%, respectively. Since the facility has achieved many of the best practice milestones thus far, the leadership has engaged TeleTracking Services for an additional full year to use TeleTracking’s data as an objective springboard of sorts—with the data, they can develop and deploy a seamless discharge process to lower levels of care to help ensure the patient is in the right level of care at the right time. 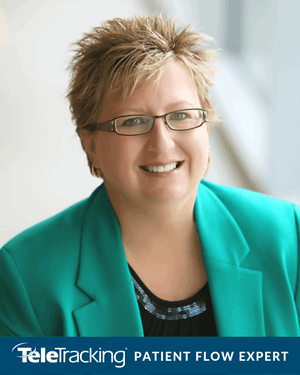